This page demonstrates how to record a call by using the command line. You can also record calls by calling the API methods, see Record by API. The command line and API methods implement the same recording functions.

Ensure that you integrate the On-premise Recording SDK before proceeding, see Integrate the SDK.

Open a command-line tool and run the following command to compile the sample code under the samples/cpp directory.

After the compilation, an executable record_local file is generated in this directory as shown in the following figure. 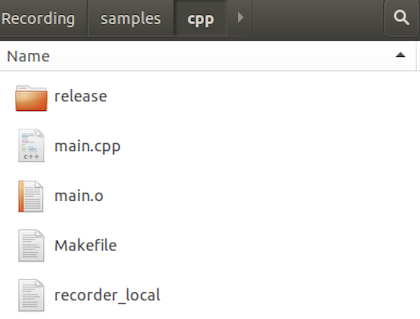 Open a command-line tool and run the following command under the samples/cpp directory.

The appId, uid, channel, and appliteDir parameters are mandatory to start a recording. Other parameters can be set as needed.

The following parameters are not mandatory, but they depend on the settings of the recording channel.

If the lowUdpPort and highUdpPort parameters are not specified, the ports used by the recording processes are at random, which may cause port conflicts.

isAudioOnly and is VideoOnly cannot be set to 1 at the same time.

Path of the recorded files

Use either of the following parameters to set the path of the recorded files.

After the recording is complete, use the transcoding script to merge the recorded files. See Use the Transcoding Script .

If any error or warning occurs during the recording, see Error codes and Warning codes.